Update (11/09/08) from our Beatle News Briefs at http://abbeyrd.best.vwh.net/fabnews.htm

Posted by ificandream at 10:14 PM No comments: 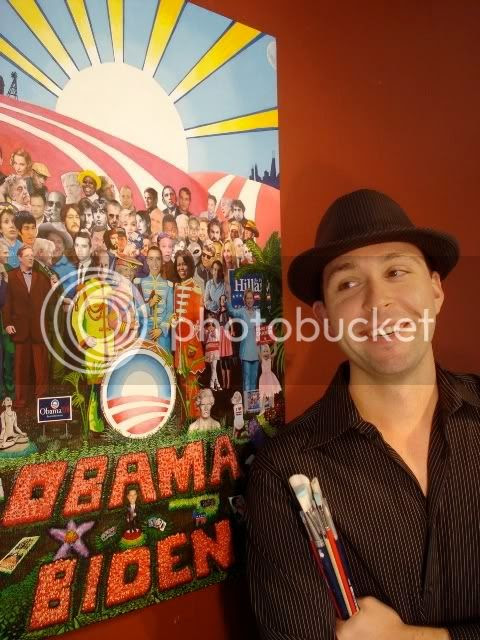 San Francisco artist Michael Cuffe has released a painting that marks the significance of the Obama Presidency, his successful presidential campaign and America's quest for hope with a nod to the Beatles' Sgt. Pepper album. The artwork, titled "Obama's Hopeful Hearts Club," is available for purchase as a print through his website for $20.


Ín an email, Cuffe told Abbeyrd's Beatles Page "I did a lot of campaigning for Obama. Made the calls, raised the
money, it was really a fun experience. Of course, I live in San Francisco which voted something like 95% for Obama, so I'm surrounded by it!" He also said that the president-elect hadn't seen the artwork, but "I had a friend who worked directly with VP Biden, and I'm told he was shown it. Obama, not as of yet.... hopefully soon!"

Here's the text of a press release Cuffe sent us explaining the whole concept:

Obama's Hopeful Hearts Club Painting Touches Barack and Beatles Fans Alike
Artist Michael Cuffe releases painting that marks the significance of the Obama Presidency, his campaign, and America's Quest for Hope.
San Francisco, CA (PRWEB) November 7, 2008 -- In the final days of Barack Obama's campaign for President, artist Michael Cuffe completed a painting that has received an overwhelming amount of attention from not only within the United States, but across the world. Obama's Hopeful Hearts Club is an inspired nod to The Beatles Sgt. Pepper
album cover, updated with individuals who made the Obama campaign a success and other interesting, inquisitive modern day personalities. It has received attention from over 70 countries, the Obama campaign itself, and is currently featured on the artist's Obama art gallery website http://www.TheObamaExperiment.com.

"I have been overwhelmed by not only the national attention, but the response worldwide. I've gotten emails that have spanned the globe from Kenya to Japan, in broken English that often read "You paint Obama good. Yay Obama!" Cuffe stated. “I feel so lucky to live in a time when the art I imagined while taking a shower can go worldwide overnight. That's just mindboggling to me,” Barack Obama art inspired the world with paintings, posters, and collectible stickers
throughout the 2008 political campaign season. Artist Michael Cuffe created The Obama Experiment to offer supporters fine political art prints that are new, fresh, and affordable. “People want art to remember their Obama experience,” explained Cuffe. “It's been a very personal journey for many.”

That journey has taken Cuffe's Hopeful Hearts Club imagery to rallies, campaign stops, and door-to-door throughout the country. "People immediately try to figure out who everyone is,” said Cuffe.

Campaign organizers in Boulder City, Nevada posted it in their staging location. As people came and went throughout the day, they would fill out a guess-who sheet. “They had built a game around the art piece,” explained Cuffe “which was just too cool.”

The Hopeful Hearts Club reflects the essence of hope the Obama campaign has inspired in millions of Americans over the past 2 years. “The 1967 Sgt. Pepper album manifested during a time of social, economic, and worldwide change,” said Cuffe. “I feel that we are in another moment where the choices we make are having a profound effect
on our lives, and the world at large.”

Everyone from Obama's grandmother to Martin Luther King take center stage in the piece. “I have taken careful consideration of individual's accomplishments, placement, and their relationship to the Obama campaign and to modern day change,” said Cuffe. “The only two outside these parameters are Bush and Cheney, whom were
replacements for the mannequin dummies in the original Sgt. Pepper.

Cuffe's artistic style is a blend of established art techniques and current digital technologies. "I call my style painted-collage,” explained Cuffe. “I digitally render images and build a painting around those images. Once the digital images are printed, cut, and placed, they are meticulously painted in fine detail to make them part of the painting. In the end, every detail is painted, so it takes on a different surrealism than your typical painting or collage,” Cuffe posts many of his works on YouTube, which draw thousands of views and offer a time-lapse glimpse into his studio. "With all my art, I film it and speed it up, so the viewer can be directly part of my creative process,” said Cuffe. “Obama's Hopeful
Hearts Club was a project that took over a month to complete, so individuals are always quite impressed to see a painting come together at 100,000 times the original speed.”

When asked if The Obama Experiment had been a positive experience, Cuffe exclaimed “Oh yes! It's been entirely wonderful opportunity to see my art travel all over this blue ball we call Earth. People from all over the world have told me how much The Hopeful Heart's Club has touched them, and that just feels wonderful.” One European country is has taken a particular liking to the piece, "Germany REALLY loves it. I mean REALLY REALLY loves it. The emails just keep coming in. I feel like Hasselhoff of the Obama art movement,” laughed Cuffe.

Update (11/8/08) from our Beatle News Briefs at http://abbeyrd.best.vwh.net/fabnews.htm


Posted by ificandream at 10:01 PM No comments:

Update (11/7/08) from our Beatle News Briefs at http://abbeyrd.best.vwh.net/fabnews.htm

Posted by ificandream at 7:35 PM No comments:

Update (11/6/08) from our Beatle News Briefs at http://abbeyrd.best.vwh.net/fabnews.htm

Posted by ificandream at 11:46 AM No comments:

Update (11/5/08) from our Beatle News Briefs at http://abbeyrd.best.vwh.net/fabnews.htm


Posted by ificandream at 10:01 PM No comments:


Posted by ificandream at 9:47 PM No comments:

Update (11/3/08) from our Beatle News Briefs at http://abbeyrd.best.vwh.net/fabnews.htm


Posted by ificandream at 9:05 PM No comments: