Update (10/5/08) from our Beatle News Briefs at http://abbeyrd.best.vwh.net/fabnews.htm


Posted by ificandream at 11:11 PM No comments:

Update (10/4 /08) from our Beatle News Briefs at http://abbeyrd.best.vwh.net/fabnews.htm


Posted by ificandream at 10:57 PM No comments:

Update (10/3 /08) from our Beatle News Briefs at http://abbeyrd.best.vwh.net/fabnews.htm


Posted by ificandream at 10:44 PM No comments:

Update (10/2/08) from our Beatle News Briefs at http://abbeyrd.best.vwh.net/fabnews.htm


Posted by ificandream at 10:55 PM No comments:

board is back up

Beatles "All Together Now" film to show in U.S. theaters one night only

Documentary Film "All Together Now" Comes to Theaters Across the U.S. for One Night Only Following Film Festival Acclaim

Apple Corps Ltd., Cirque du Soleil and EMI Music Partner With The Bigger Picture and AEG LIVE to Bring "All Together Now" to Digital Cinema Screens on October 20th "'All Together Now' Wowed Audiences" -- Variety

LOS ANGELES, CA, Oct 01, 2008 (MARKET WIRE via COMTEX) -- Apple Corps Ltd./Cirque du Soleil will partner with The Bigger Picture, an AccessIT company (AIXD: AIXD) and AEG Network LIVE to bring the highly acclaimed feature-length documentary "All Together Now" to digital cinema audiences on October 20th. This one night only event follows well-received film festival screenings across North America, including a sold out opening night U.S. premiere at the Silverdocs Festival in Washington D.C. where the Washington Post observed that "All Together Now" "cuts into the heart of [LOVE]."

These screenings precede the October 21 release of "All Together Now" on DVD, which will be marketed and distributed worldwide by EMI Music and available in the U.S. exclusively at Best Buy.

"Seeing this documentary on the big screen will truly be a moving experience for the viewer as they witness the creation of the show LOVE," says director Adrian Wills. "The digital cinema projection and amazing 5.1 sound allow us to envelop the audience in the grandiose visual world of Cirque du Soleil and legendary music of The Beatles."

Cinema-goers will have the opportunity to enter a sweepstakes with a grand prize that will include a pair of tickets to LOVE(TM) Tapis Rouge(TM), an exclusive behind-the-scenes experience of the show; roundtrip airfare for two within the continental U.S. to Las Vegas, and a three day/two night stay at the Mirage; a copy of every Beatles CD currently in release; and a copy of the "All Together Now" DVD.

"All Together Now" has screened at a number of festivals in the U.S. and across Canada in 2008, and accolades have followed. Among them were Rolling Stone's praise of its sweeping visual style and "many insightful interviews." Las Vegas Magazine called "All Together Now" "remarkable" and Variety observed that the film "wowed audiences."

The documentary details the story behind the unique partnership between The Beatles and Cirque du Soleil that resulted in the creation and 2006 launch of LOVE, the stage production still playing to packed houses at The Mirage in Las Vegas, and the experimental Beatles soundscape album of the same name which garnered two Grammy Awards for producers Sir George and Giles Martin. The movie is dedicated to the memory of Neil Aspinall, former CEO of Apple Corps and an Executive Producer of the DVD.

The director, Adrian Wills, traveled between London, Montreal, and Las Vegas, recording early meetings between the Cirque du Soleil & Apple Corps Ltd. creative teams, as well as filming contributions from Sir Paul McCartney and Ringo Starr, along with Yoko Ono Lennon and Olivia Harrison discussing how The Beatles' music can be used in a different way. Noting the uniqueness of these interactions, Wills explains, "What surprised me the most was how human the whole process was."

These early stages of the project were all filmed, as were the first rehearsals at the Mirage Hotel theatre in Las Vegas, which was completely rebuilt with a one-of-a-kind sound system and complex round staging to house the LOVE show. Sir George and Giles Martin, the show's Musical Directors, were involved every step of the way with the remarkable Cirque du Soleil creative team, performers and backroom staff.

It wasn't all "plain-sailing" and there has been no attempt to disguise some of the disagreements that took place along the way regarding how some of the songs would be portrayed visually. These creative differences, a necessary part of the overall process of bringing LOVE to its most vibrant life, illustrate the participants' love and respect for the music and vision of The Beatles.

The Bigger Picture's partner content is delivered to theatres via satellite wherever possible via AccessIT's 270 site satellite network which reaches 40 states around the U.S.

The October 20th screenings of "All Together Now" will take place at digitally equipped cinemas across the country. Locations and show-time information are available at http://www.thebiggerpicture.us .

The Bigger Picture is a leader in the digital distribution of movies targeted to specific audiences. The programs include Bigger Concerts, Kidtoons, G-rated movies for kids on the weekends, anime films for teen and college audiences, sports and inspirational faith-based movies. The Bigger Picture has released 50+ films digitally. For more information, visit www.thebiggerpictur

Posted by ificandream at 10:36 AM No comments:

Email ThisBlogThis!Share to TwitterShare to FacebookShare to Pinterest
Labels: "All Together Now", Abbeyrd, Abbeyrd's Beatles Page, All Together Now, Beatles

Update (10/1 /08) from our Beatle News Briefs at http://abbeyrd.best.vwh.net/fabnews.htm

Posted by ificandream at 11:10 PM No comments:

Update (9/30/08) from our Beatle News Briefs at http://abbeyrd.best.vwh.net/fabnews.htm


Posted by ificandream at 10:37 PM No comments: 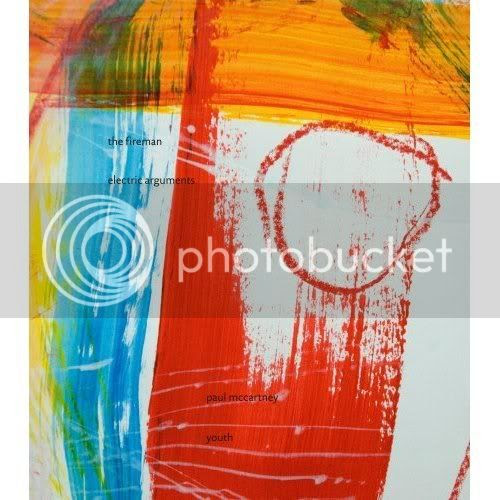 Paul's website now has the official announcement about the Fireman release. Here it is:

“Ambient dreams in rainbow arches describe the circles of The Fireman”, is how the duo described their music in a rare interview around the release of their last album ‘Rushes’ in 1998. Their first album ‘Strawberries Oceans Ships Forest’, released in 1993, was a solid ambient dance album heavy on electronics. Around this time the identity of The Fireman was unknown until the press exposed the duo as none other than Paul McCartney and Youth. The now defunct music bible Melody Maker heaped praise on the project, “Paul McCartney has discovered dance music – the results are staggeringly brilliant. They (The Fireman) take a melody and, with dexterous genre-hopping through ambient, trance and house, evolve a number of breathtaking variations.”

Last year The Fireman returned to work again to start work on what would become Electric Arguments. The results this time are entirely different.

Earlier this year The Fireman donated a new track, Lifelong Passion, from Electric Arguments, to the charity Adopt-A-Minefield. This new track marked a directional change for The Fireman. Lifelong Passion showcased a new more traditional song based sound with vocals, going against the sound of the first two albums. And so the speculation began. A ‘studio source’ was quoted in The Times as describing their new sound ‘like Arcade Fire meets Led Zeppelin’. So what had The Fireman been up to and what does the album sound like?

Electric Arguments is an eclectic and varied album consisting of thirteen tracks recorded in thirteen days over the period of nearly a year. Each track was written and recorded in the space of one day. The Fireman went into the studio with no plan or clear direction of how they wanted the album to sound. The project took a life of its own and the results will surprise anyone expecting to hear the previous sound of the band.

The album’s opener Nothing Too Much Just Out Of Sight is classic rock and an instant attention grabber. A heavy guitar riff with loud drums and souring vocals, it’s like nothing The Fireman have ever done before. The second track, the acoustic driven Two Magpies immediately takes you in a different direction, calming things right down. Then we reach the third song Sing The Changes, a euphoric upbeat song with an instantly memorable melody. Electric Arguments continues in this fashion, keeping the listener intrigued as to where The Fireman will take them next. Each album track has an entirely different personality, yet somehow this collection sits together perfectly. Other standout tracks include ‘Light From Your Lighthouse’, ‘Sun Is Shining’ and ‘Dance ‘Til We’re High’, all in keeping with the genre-hopping spirit of the first two The Fireman albums. Electric Arguments demonstrates that Paul McCartney is still interested in pure musical possibilities. This is an album set to both surprise and delight the listener. Made with no record company restraints or a set release date to work to, Electric Arguments was made with complete artistic and creative freedom.

Electric Arguments is released on One Little Indian


Posted by ificandream at 8:22 AM No comments:

Update (9/29/08) from our Beatle News Briefs at http://abbeyrd.best.vwh.net/fabnews.htm


Posted by ificandream at 9:31 PM No comments: